To this point we’ve talked about the assumptions behind a literal millennial kingdom being the fulfillment of the land promises of the Abrahamic covenant. Since the timing of ideas like the rapture and second coming are oriented by and around a millennial kingdom, whether there is such a thing is pretty important. If you don’t believe in a coming millennial kingdom—and many Christians don’t (“amillennialists”)—then you’re not going have any time for the rapture. You’ll likely embrace the second coming, but you’ll see its relationship to the kingdom of God quite differently than a Christian who is looking forward to a millennium. You’ll also look at the nation-state of Israel quite differently.

In regard to the Abrahamic covenant, in the last installment we saw the assumption that 1948 has something to do with fulfilling the Abrahamic covenant (or keeping it alive in a literal sense) is not at all self-evident in light of Galatians 3. The reason, of course, is that Galatians 3 so transparently says that Abraham’s descendants are all who believe, Jew or Gentile, and that these believers, merged together into the Church as the new people of God, inherit the promises given to Abraham. Having “sinned away” the promises of God’s covenant, Israel had been replaced by the Church as the “children of Abraham” who would inherit those promises.

What Scripture teaches in Galatians 3 is fundamental to Christians whose beliefs about the end times are contrary to Christians who believe in a millennium and rapture. Consequently, there is a biblical argument to made against these ideas. But is that the whole story? Many Christian scholars are aware of what Galatians 3 says and still believe in a rapture and millennium. In this installment, we’ll overview why that is the case and introduce another set of assumptions that help us understand why Christians disagree on how to interpret end times prophecy.

Did Israel Forfeit the Promised Land?

Those who still embrace a millennium despite the theology of Paul in Galatians 3 don’t believe that what Paul says contradicts their position. The reason is straightforward but not obvious: Paul never specifically says that believers—and hence the “circumcision neutral” body called the Church—are inheritors of the land promise. This of course is an argument from silence based on the assumption that Paul’s statement in Gal 3:26-29 requires such specificity. Here is what Paul said to refresh our memories:

7 Know then that it is those of faith who are the sons of Abraham. 8 And the Scripture, foreseeing that God would justify the Gentiles by faith, preached the gospel beforehand to Abraham, saying, “In you shall all the nations be blessed.” 9 So then, those who are of faith are blessed along with Abraham, the man of faith. . . . 26 for in Christ Jesus you are all sons of God, through faith. 27 For as many of you as were baptized into Christ have put on Christ. 28 There is neither Jew nor Greek, there is neither slave nor free, there is no male and female, for you are all one in Christ Jesus. 29 And if you are Christ’s, then you are Abraham’s offspring, heirs according to promise.

It’s very obvious from this that the Church (believers whether Jew or Gentile) inherit the Abrahamic covenant. But it could be (and of course is) argued that Paul could have explicitly said something to the effect that instead of the land being given to Abraham’s seed, the fulfillment is now the world given to the children of Abraham—hence there is no importance to Israel being a national entity for future prophetic fulfillment. As it stands now, those who want Galatians 3 to subsume the entirety of the covenant have to presume it does rejecting the alternative as an argument from silence.

Again, neither position is “self-evidently biblical.” Either view requires an assumption or two.

Was the Land Promise Fulfilled in the Days of Solomon?

Some Christians who don’t look for a millennial kingdom as the fulfillment of end times prophecy argue that Paul didn’t mention the land element for a specific reason. Yes, Israel “sinned away” her status as recipient of the covenant promises, but we need not quibble about Paul not specifically mentioning the land because the land promises had already been fulfilled earlier in Israel’s history.

This idea will sound quite odd to those whose prophetic expectations include a millennium, and who view events in 1948 as the precursor to an earthly 1000-year kingdom under the returned messiah. To understand it we need to look at the geographical description of the land originally promised to Abraham:

On that day the Lord made a covenant with Abram, saying, “To your offspring I give this land, from the river of Egypt to the great river, the river Euphrates…” (Gen 15:18)

These parameters are later reiterated to Moses in connection with the task of the conquest:

“And I will set your border from the Red Sea to the Sea of the Philistines, and from the wilderness to the Euphrates, for I will give the inhabitants of the land into your hand, and you shall drive them out before you.” (Exod 23:31)

Why do the descriptions matter? Because these same land parameters match (apparently) the land brought under Israelite dominion during the days of Solomon:

Solomon ruled over all the kingdoms from the Euphrates to the land of the Philistines and to the border of Egypt. They brought tribute and served Solomon all the days of his life. (1 Kings 4:21)

Here’s a picture of Solomon’s dominion drawn from the above and other sources in the Old Testament: 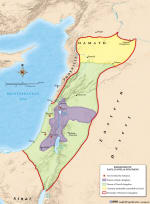 The visualization is important not only because it shows where Solomon’s dominion aligns with the boundaries of the Promised Land—but because it also shows where the alignment breaks down. Take note of the land marked Phoenicia on the eastern coast of the Mediterranean. According to Josh 19:24-28 and Judg 1:31-32, the land promised to Abraham was interpreted as includingSidon. As the map shows, this was not the case under Solomon. This disconnect gets even more pronounced when one considers the nations in the Transjordan (east of the Jordan) that certain tribes inherited at the conquest, but which were not included in the original promise to Abraham. Consequently, those who resist the idea that the kingdom was fulfilled in the Old Testament period have a coherent objection—but still only an argument from silence when it comes to Galatians 3.

Those who want to make the argument that the Promised Land element is fulfilled argue (truthfully) that the dimensions of the Promised Land are inconsistent in the Old Testament—the descriptions do not always agree. That’s evidence in the case of the Transjordan, but there are other differences (see Kallai and Wazana below). If the land dimensions are inconsistent, so the argument goes, then we shouldn’t care about precision with respect to the Solomonic kingdom.

Again, one can see how a text-based argument for either position can be put forth without complete resolution. One’s decisionon which option is preferred will in turn frame one’s thinking about an end times kingdom. And that issue in turn affects whether one believes in a rapture or a literal tribulation.

What do you think?
We have all sinned and deserve God’s judgment. God, the Father, sent His only Son to satisfy that judgment for those who believe in Him. Jesus, the creator and eternal Son of God, who lived a sinless life, loves us so much that He died for our sins, taking the punishment that we deserve, was buried, and rose from the dead according to the Bible. If you truly believe and trust this in your heart, receiving Jesus alone as your Savior, declaring, "Jesus is Lord," you will be saved from judgment and spend eternity with God in heaven.

What is your response?

I am a follower of Jesus

I still have questions

Help get this translated